Hero worship may be passé, but I can’t help myself with Rafa. I am going to show some restraint and not eulogize him here. However, even a die-hard Roger-head will admit that his 13 French Open titles record is unlikely to be matched in ours or even our great grandchildren’s lifetimes.

In the afterglow of his 13th title a few weeks ago, this graphic (courtesy of Star Sports) really grabbed my attention: 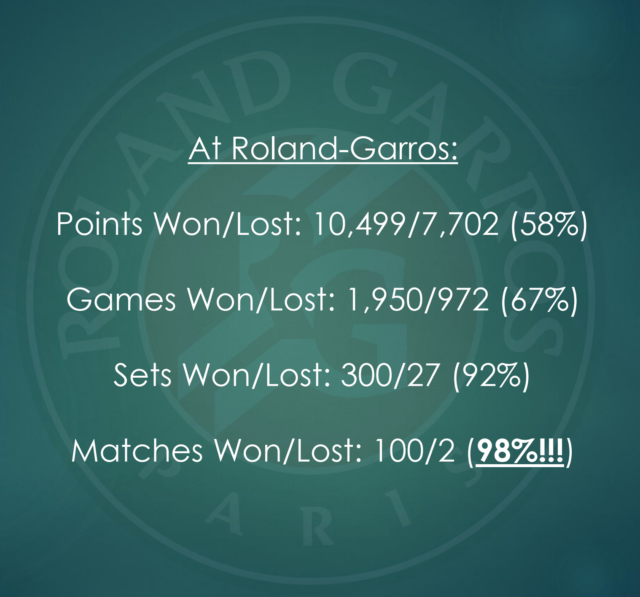 Even Nadal, the GOAT on clay (it is not even close), wins ONLY 58% of his points. This is only slightly better than the pure chance rate (50%), but it compounds over the 215 points that are typically played in a match resulting in an unbelievable 98% win rate!

The best hedge fund in the world

Jim Simons, a mathematician and Cold War code breaker, founded Renaissance Technologies in 1982. Renaissance’s flagship Medallion fund, which is run mostly for fund employees, is known to have the best track record on Wall Street, returning more than a staggering 66% annualized before fees and 39% after fees over a 30-year span from 1988 to 2018.

Their average hold period is only 2 days and the average trade success rate is barely above 50% (Source: “The Man Who Solved the Market: How Jim Simons Launched the Quant Revolution” by Gregory Zuckerman). So, how has Renaissance been so successful with a strike rate of barely better than pure chance?

To say one must invest for the long term is as clichéd as it sounds, but by doing so one can compound a slight edge to a dominant alpha.